If there’s one group of plants we all adore at Plumline, it’s conifers! Conifers are a type of gymnosperm that bear cones to reproduce rather than flower. Most conifers that grow in our region (but not all) are evergreen, needle-bearing plants such as pine, spruce, and fir.

But I have one rule that I beg you to follow: be sure to give your conifer the room it needs to grow to reach maturity!

Don’t plant something that will mature 20 feet tall and 8 feet wide a mere 3 feet from your house because you want an instant look. You know that either you or the next tenant is going to have to prematurely cut it down, and this “plant now, cut down 15 years later” is a bad habit homeowners and landscapers need to kick. So, let’s plan ahead! If your space looks empty after planting your conifer, plant small shrubs or perennials around them. You can easily move some irises around as your evergreen specimen grows. It’s A LOT more maintenance to deal with a big plant that was planted improperly.

Now, let’s get into some plant specifics! 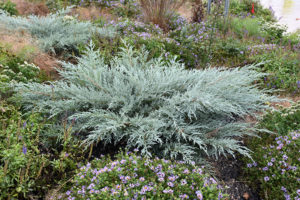 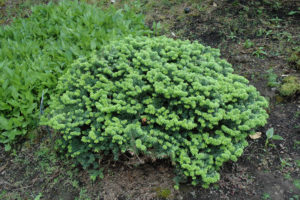 Foundation plants are plants that are grown around the base of a home or building. They help soften the structure and building material with color, form, and texture. For a simple, standard landscape, I think a third or ¼ of your foundationplants should be evergreen. This keeps color in the winter which helps anchor the beds and the home.

There are some conifer shrubs that work well as foundation plants, such as dwarf selections of Mugo Pine (Pinus mugo) and spreading Junipers (Juniperus sp.). But in order for them to have the space they need, your foundation beds should be 5 to 6 feet in depth if possible. I have seen too many butchered conifers due to beds being only 3 feet wide. Be also mindful of windows. I’ve also seen far too many conifers mutilated because they were too large for under a window. For split-level basement windows, consider a groundcover conifer such as Blue Pacific Juniper (Juniperus conferta ‘Blue Pacific’) that will not block out sunlight.

Avoid using all conifers and evergreens though. Without flowering shrubs or perennials, your foundational planting in summer will look the same as it does in winter and will be stagnant. Use conifers strategically and tastefully!

One of my favorites is Grey Owl Juniper (Juniperus virginiana x ‘Grey Owl’). This vigorous juniper has a silvery, powdery-blue color and matures around 3-4’ high and 5-6’ wide. If it’s super happy with its spot however, it may grow larger than the listed mature size, so occasional proper pruning may be in order. The female form produces berries which add interest! 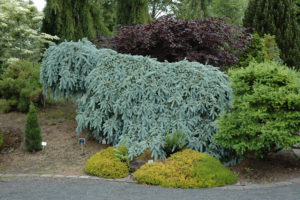 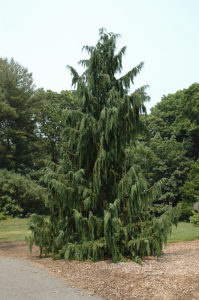 A mature, properly placed conifer specimen always draws attention. These specimens are usually trees but can also be large shrubs. If you have the space, create a new bed in the middle of your lawn, or widen an existing bed. Occasionally, I see a fully mature weeping Alaskan Cedar, which can mature around 20+ high and 10+ wide in our climate – and I notice them immediately from the road. They are magnificent! Sadly, too many homeowners plant them on a corner near their home and end up cutting them down 10 or 20 years later.

If you are really hankering for a unique specimen near the house, consider a strictly weeping specimen, such as a weeping Norway Spruce (Picea abies ‘Pendula’) or The Blues weeping blue spruce (Picea pungens var. glauca ‘The Blues’). A weeping conifer without a central leader will be less overbearing against the house.

Not all conifers are evergreen though. Another great specimen is the weeping Larch (Larix sp.). They have soft needles, almost feathery, that emerge bright green in spring and then turn a nice yellow or russet in fall. Sure, it’s not evergreen, but it’s unique. We sell out out of them every year!

Be sure to triple check information on sizing though. Some weeping trees will get much larger such as the stunning weeping white pine (Pinus strobus ‘Pendula’). We’ll talk more about sizing in a minute though!

When you plant a conifer specimen, underplant with things that give contrast but don’t distract. Let’s say you want to plant a Blue Japanese White Pine (Pinus parviflora ‘Glauca’), which has a neat architectural habit. It will get larger…but not for a long time. I wouldn’t plant shrubs near it from the get-go. Instead, underplant with some low flowering perennials, or maybe a few small ornamental grasses. 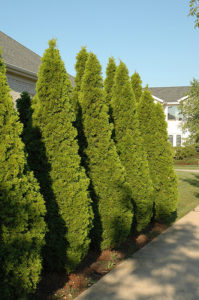 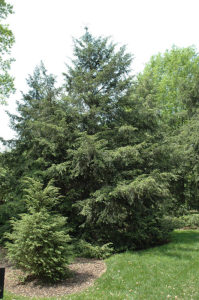 Conifers also make excellent privacy screens. You’re likely familiar with arborvitae. The cultivar Emerald Green (Thuja occidentalis ‘Smaragd’) is as common as bread and milk. Because their width is only a third or so of the height, arborvitae make a great screen for smaller yards. The same size exists for many upright Junipers, such as the beautiful Wichita Blue Juniper (Juniperus scopulorum ‘Wichita Blue’). We carry several other cultivars of juniper too.

One of our top sellers is the Green Giant arborvitae (Thuja x ‘Green Giant’). It grows much faster and can mature at 30 feet height and half the width. It also has much better deer resistance than other arborvitae.

Be mindful of deer though. When food is scare in winter, they may pick at your newly planted conifer (the evergreen ones anyway). Depending on which ones, I encourage protecting them in some way during the winter months, either with temporary netting or periodic spraying with repellant. 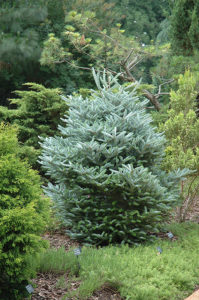 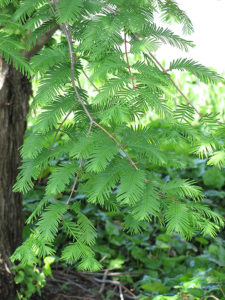 The lush foliage of the Dawn Redwood.

Sizing can be confusing when it comes to woody plants and this is especially true with conifers so you’ll want to take multiple things into consideration: their 10-year size, their mature size (or “garden size”), and their growth rate in *our climate.* Many conifer growers will indicate both a 10 year size and a mature size on their tags and websites. Some will also tell you growth rates (for example, 6 to 12” a year). As our growing season is shorter than many parts of the country, you can usually assume a plant with a 6-12″ a year growth rate will grow around 6 inches.

Then there’s the term “dwarf.” To put it simply, “dwarf” doesn’t mean it will necessarily stay small forever. I think a more accurate, universal definition would be  “slow growing.” While dwarf plants may be smaller than a plant of a larger variety, a plant that grows at half the rate of its counterpart still has the potential to get big…it will just take a lot longer.

Also keep in mind that maturity doesn’t mean a plant is finished growing. The only plant that stops growing is a dead one! For example, a California redwood (the world’s tallest tree) usually matures around 50 or 60 feet in a landscape. But if they’re happy and healthy, they don’t stop growing. That’s why there are specimens in the wild that are over 300 feet tall!

For the record, it’s too cold to grow that tree here. But we do sell its cousin, the Dawn Redwood (Metasequoia glyptostroboides)! This conifer has similar foliage but is deciduous. The needles turn russet in fall and after they drop, the beautiful redwood bark vividly stands out! It’s a great tree if you have the space!

One of our growers is Iseli Nursery, which specializes in functional and unique conifers: they have a great post here on sizing conifers. Click here to read more: https://www.iselinursery.com/garden-size-explained/

Other than taking out a dead or an occasional wonky branch, avoid pruning conifers. You shouldn’t have to rely on pruning for size control if you site your plant correctly. But depending on the plant, if conservative and proper pruning is utilized, you can help slow growth rate or improve aesthetics. First though, you need to know what each plant requires. Pine, spruce, and fir, for example, should only have their newest growth pruned, no more than half, in late June or July. If you cut back into older wood or prune in fall, you risk damaging them as they don’t rejuvenate from older wood like hedging shrubs do. Hemlock and arborvitae are more lenient but it’s still better to prune soft growth that’s not hardened off yet.

For more information, the American Conifer Society can help. https://conifersociety.org/conifers/articles/how-prune-evergreens-conifers/

“Spruce up” the Landscape! 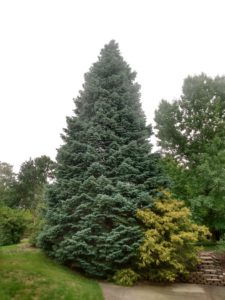 A concolor fir (Abies concolor) in a Pittsburgh landscape that was given the space it needed from the beginning – an uncommon site!

We’re proud to bring in a variety of conifers from the three categories I mentioned above! If you’re “pine-ing” to get started, we’re happy to help you! But if you’re in the mood for more reading and pictures in the meantime, here are some great resources. Happy planting!