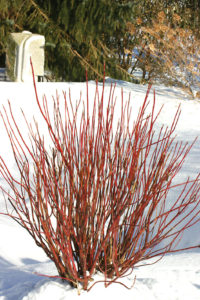 Brr….Pennsylvania can be cold! And it’s cold for a good 4 months! Because that’s 1/3 of an entire year, most people recognize that having some color during the winter months is desirable in the landscape. Evergreens such as boxwood and mountain laurel bring green foliage during these months as do conifers like pine and spruce. Evergreens also come in a variety of colors, notably gold such as Gold Mop threadleaf cypress and blue such as Globe blue spruce. Fire Chief arborvitae has a nice orange-bronzy color and the Variegated Ponticum rhododendron has green-and-white variegated foliage. Some also change color in winter, such as Chief Joseph Lodgepole Pine which turns to butterscotch yellow in winter. Evergreen plants are important!

But evergreen foliage is not the only plant attribute that can bring winter beauty to a landscape. In fact, I caution you to not overdo it on evergreen plants – you want a landscape that changes and evolves with the seasons! Relying too heavily on boxwood and spruce can translate to a summer landscape that looks identical to winter’s and that’s just stagnant. Yuck!

So what else can bring interest then? 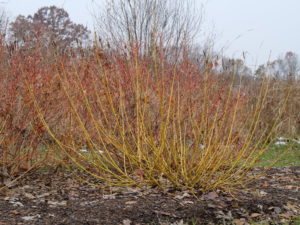 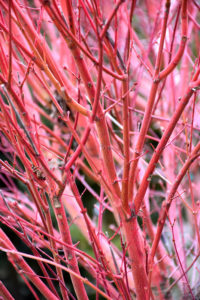 Some plants have colorful stems such as the Red twig dogwood (e.g., Cornus alba, C. stolonifera, C. sericea) . This is a grade A+ landscape shrub! There are several species and several cultivars available but all of them do the same thing: when cold temperatures arrive in late fall, the stems turn bright red and last until warm temperatures arrive in mid-spring. There is also the Yellow twig dogwood which has gold stems in winter! There are other hues of color as well, such as Proven Winners Arctic Sun ® which has orange to coral stems! 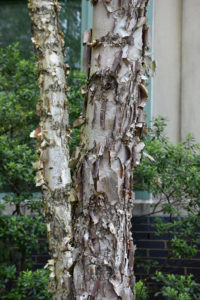 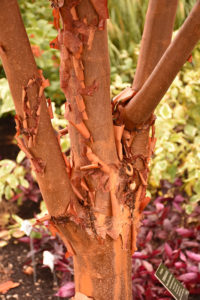 Lots of trees and shrubs have beautiful bark which becomes pronounced in winter after foliage has dropped! Some trees have beautiful, exfoliating or papery bark such as Paperbark maple (Acer griseum), River birch (Betula nigra) , and Paper birch (Betula papyrifera). Shrubs such as Oakleaf Hydrangea (Hydrangea quercifolia) and Ninebark (Physocarpus opulifolius) do the same, although may only be noticeable if planted in a high traffic area. Bark becomes more exfoliated with age so don’t be surprised if tree bark in the nursery are still smooth!

Himalayan birch (Betula jaquemontii), and Quaking Aspen (Populus tremuloides) have cream or white colored bark which vividly stands out on a gray winter day! Stewartia (Stewartia pseudocamilia), Kousa dogwood (Cornus kousa), Lacebark elm (Ulmus parvifolia), and Lacebark pine (Pinus bungeana) have a patchwork of textures and colors which is very unique! Flowering dogwood (Cornus florida), as it ages, gets a neat alligator-hide texture – and who doesn’t like dogwoods? 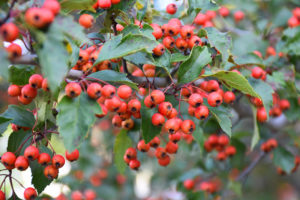 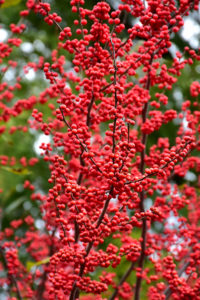 Ornamental fruits bring additional color and form to the landscape! While many fruits bring interest in fall, the fruit on some trees and shrubs are persistent, which means the plant holds onto the fruit into winter. Birds typically don’t eat these fruits until a freeze-thaw cycle on the fruit makes them more palatable. Shrubs include Meserve holly (Ilex x meservae), Winterberry holly (Ilex verticillata), Coralberry (Symphoricarpos orbiculatus), and Snowberry (Symphoricarpos alba).

Meserve Hollies are a series of hybrids that have the appearance of how most people envision hollies. Winterberry holly, a native shrub, is deciduous which makes the appearance of the berries more vibrant on its bare winter stems. Phipps has a mass planting of winterberry holly outside the front entrance which is highly noticeable starting November! Coralberry and Snowberry are less utilized plants but are durable plants that make beautiful fruits in their respective colors.

Another great one is Northern Bayberry (Myrica pennsylvanica), which sports silvery-grey berries!

Trees also can make nonmessy, persistent fruit such as hawthorns. Two cultivars we often carry are Winter King (Crategus viridis ‘Winter King’) and the new Proven Winners introduction Crusader® (Crataegus crus-galli var. inermis). I added Winter King in my landscape this year as I think it’s one of the best! Some newer crabapple selections are similar such as Sugar Tyme (Malus ‘Sutyzam’), Royal Raindrops® (Malus ‘JFS-KW5) and Prairie Fire (Malus ‘Prairifire’). And let’s not forget the American holly (Ilex opaca)! 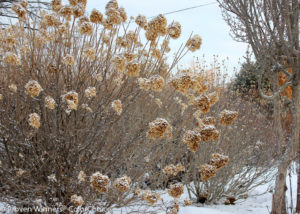 Another great way to maintain natural beauty is to retire your pruning shears in fall. Many shrubs and perennials have flowers that dry on the plant and persist into winter. While the color of the flowers are gone, the shape, form, and textures remain. Panicle and Oakleaf hydrangea are great for this; in fact, it should be a crime against horticulture to deadhead the blooms in fall!

The same applies for many perennials such as coneflowers that have sturdy seedheads including Echinacea., Helen’s Flower (Helenium autumnale), and Black Eyed Susan (Rudbeckia sp.). Leaving them stand also feeds the gold finches in fall and winter!

Others such as False Indigo (Baptisia sp.) and Wild Senna (Senna hebecarpa) flower in early summer but the neat seed pods persist into winter! 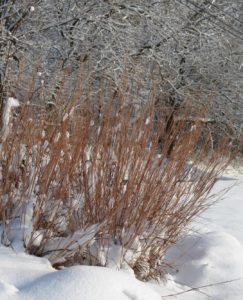 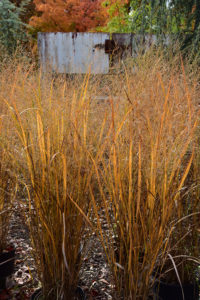 To me, one of the most attractive aspects of ornamental grasses is that I can leave the dried foliage up in winter. Most grasses in cultivation are emerging from dormancy in late spring so chopping them down in late fall only gives you 2 seasons of interest. I recommend cutting them down in spring when new foliage emerges from the crown so you have 3 seasons of interest!

One of my favorites is Switch Grass. I have the cultivar ‘Northwind’ in my landscape and its stiff habit allows it to take snow loads like a champ. Karl Foerester (Calamagrostis x acutiflora ‘Karl Foerster’) is another one that takes snow loads well. Some grasses take snow loads better than others… but you know what, snow making a grass flop is what happens in nature and nature is beautiful!

But if that’s a deal breaker for you, smaller mounding grasses don’t bend from snow like taller ones are might. Tufted Hair Grass (Deschampsia cespitosa), Prairie Dropseed (Sporobulus heterolepis), and many Fountain grasses (Pennisetum alopecuroides) are great choices. 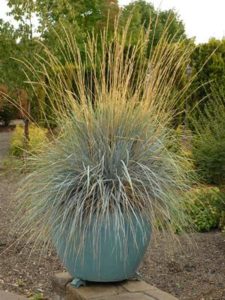 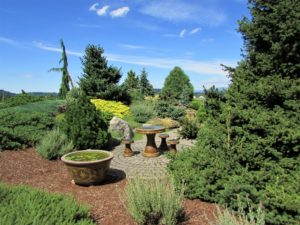 Appropriate and strategic use of boulders and interesting stone can be a great addition to a landscape to bring year-round interest. Like evergreen plants, they can help anchor a landscape in all four seasons.

Durable, tasteful planters that can stay in the landscape year-round can also give structure and permanence in the landscape. Whether they contain evergreen shrubs, ornamental grasses, or are empty in the winter, they can contribute to the winter landscape. Bigger tends to be better as they are more noticeable from afar and retain better moisture during the growing season. If you decide to overwinter an evergreen shrub or perennial in the planter, a larger planter will provide more insulation from the freeze-thaw cycle of early spring than a small one.

Think Outside the Basic!

Think of your landscape as an extension to your home. Decorate it! Make it look inviting! I know “low maintenance” is what everyone wants, and that’s fine. I like low maintenance too. But a little extra planning and thinking ahead about your home’s extension (and less impulse buying) will really make it shine – even in winter.