Vines: The Secret Ingredient for a Classy Landscape

Vines: The Secret Ingredient for a Classy Landscape 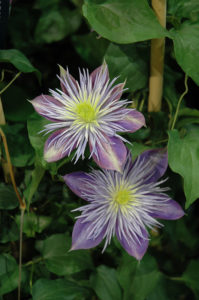 I think vines are the most underutilized “category” plant in the landscape. I think it’s because most people’s encounter with vines are with misbehaved ones. And of course we have invasives like Oriental bittersweet (Celastrus orbiculatus) and if you’ve ever travelled south, the infamous kudzu (Pueraria montana) that can strangle everything in its path. But like all plants, picking the right one for the right spot is key.

Vines are fantastic for three reasons. First, they bring different form to the landscape. They grow in a different way than other garden plants (e.g. trees, shrubs, perennials, etc.). Their upright habit on a trellis or arbor brings vertical dimension to the garden. Landscapes are primarily centered on eye-level appearance and rightfully so but we shouldn’t limit it to that alone! Vines draw the eye upward allowing the viewer an increased experience.

Second, vines are great for areas with limited space. In areas where a tree or shrub would take up too much room, a vine can be an easy way to add height to a landscape bed without requiring the width. My home is on a narrow property so the side beds are only 4 feet wide. Trees are out of the question and the few shrubs I’ve used will not attain much height. So, to add some greenery and dimension to such a narrow area, I built a couple trellises and put them against the house. Voila!

Third, vines are great because – like many other trees, shrubs, perennials, etc. – many of the ones available have unique garden characteristics! As with all plants, take into account the mature size of the plant, the conditions in the area you are considering planting, and proper pruning methods. We want you to buy vines that are pretty…but don’t buy them only because they’re pretty. Pick ones that will work for you!

If you like reading, I recommend Climbing Gardens: Adding Height & Structure to Your Garden by author and horticulturist Joan Clifton. It’s one of my favorite gardening books!

Let’s talk about some cool vines, shall we? 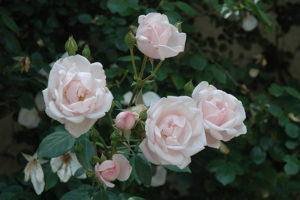 If you want your landscape to be the envy of the neighborhood, find a sunny spot for a climbing or rambling rose. Talk about a “wow” factor! A few years ago I visited Filoli Gardens on a vacation to the Bay Area and the most memorable plants were their climbing roses! Climbing and rambling roses are not “true vines” so they need a little help getting started on a trellis (some rope or ties will do). What are their differences? Climbing roses tend to be smaller while rambling roses tend to be more vigorous. Climbers typically produce larger blooms late spring through fall while ramblers produce smaller blooms in a smaller time window – but in much higher volume! Climbers tend to be more sought after but ramblers tend to be more forgiving of poorer soils, light shade, and neglect.

Roses have a reputation for being fickle but the trick is just knowing what they love. They love sun, water (but don’t waterlog them), good air circulation, and food. I personally like Espoma’s organic “Rose Tone” which we always carry. Be mindful of pruning though as many bloom on last year’s growth – so don’t get carried away! Also, keep hungry deer away with a repellant such as Deer Off or Bobbex. I’ve been using the latter in my garden once a week and it works. 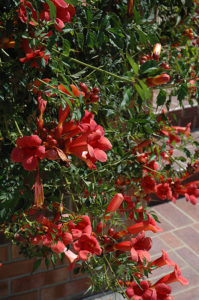 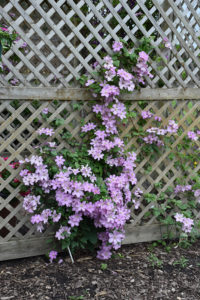 There are a lot of species, hybrids, and cultivars of clematis. Many are also on the smaller side, perfect for a lamppost, mailbox, or porch railing. I love the cultivar “Crystal Foam” which sports light purple double flowers. Another popular one we typically have is “HF Young” which has large, lilac colored flowers. Some clematis are larger however, so read the tag! One of my garden additions this year is Virgin’s Bower (Clematis virginiana), a native clematis that resembles the more common Sweet Autumn Clematis (Clematis paniculata).

Some consider clematis finnicky but the trick is knowing what they like. They appreciate full sun but don’t like a lot of heat. Clematis are best planted where there is even moisture and other plants around – probably not as suited near a hot patio or with rock mulch.

Clematis are divided into three categories (group 1, group 2, and group 3) based on their pruning preferences. This is just to help trim-happy gardeners avoid compromising next year’s booms! Here is an infographic to help: https://siouxcityjournal.com/advertorial/siouxland_homes/pruning-clematis-vines/article_729df306-3845-561c-96f3-d6d1404e05b5.html

Trumpet vine (Campsis radicans) is awesome but can be aggressive. Be sure to give this one a lot of room! Though native to the mid-Atlantic and northeast, the habit and floral display almost has a tropical appearance. Hummingbirds love them too! This is a great plat for covering a large fence, garage or shed. 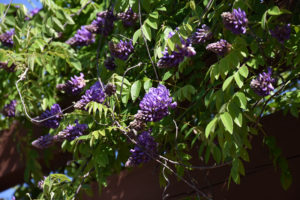 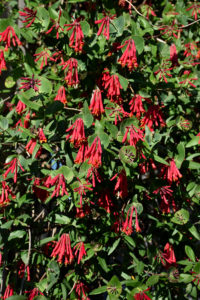 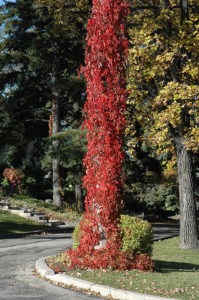 Virginia Creeper, adorning what would otherwise be a dull telephone poll. 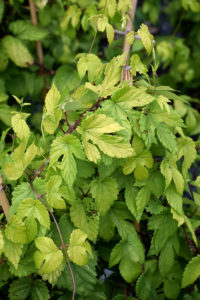 Not to be confused with Boston Ivy or Poison Ivy, Virginia Creeper (Parthonecissus quinquefolia) is a fantastic vine! Some people refer to it as a weed but that’s only because bird-dispersed seedlings periodically show up in undesired areas. I have a volunteer that started growing last year and I’m going to let it do it’s thing! Virginia Creeper is not only hardy and beneficial to birds and pollinators (such as the Virginia Creeper Sphinx moth) but also has a very attractive habit. The fall color is stunning and can be a vibrant red or a kaleidoscope of colors, being more pronounced in full sun. And if it’s growing on your house, don’t worry, it won’t ruin the siding! https://laidbackgardener.blog/2018/09/24/do-climbing-plants-damage-walls/

These are vines for shade! Climbing Hydrangea (Hydrangea petiolaris) is a top notch vine with crisp green foliage and large lacecap flowers. Japanese hydrangea (Schizophragma hydrangeanoides) is similar but often has silver venation in the foliage and sports airier blooms. Woodvamp (Decumaria barbara, formerly Hydrangea barbara) is native to north America. It likes shade as well but does tend to get larger. 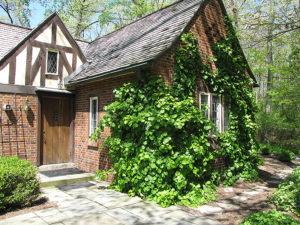 Even when not in flower, Climbing Hydrangea (Hydrangea petiolaris)  softens the hard edges of a cozy home. 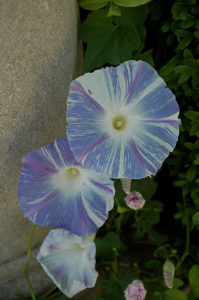 Edible vines can be pretty too! A pergola or trellis with a grape vine (Vitis sp.) is very classy! We sell hops (Humulus sp.) which is an attractive vine too. I recently planted Proven Winner’s cultivar “Summer Shandy” which is a chartreuse cultivar. It’s an ornamental but you can use the hops if you want!

And of course, we have annual vines. I adore morning glories (Ipomoea sp.), Black Eyed Susan vine (Thunbergia alata) and sweet peas (Lathyrus odoratus). The species Ipomoea tricolor sports what most plants don’t: true blue flowers! Most common is Clark’s Heavenly Blue but also available is Blue Ismay and Flying Saucers. I’ve grown all of them! If you like purple foliage, Hyacinth Bean is another I’ve had great success with too (Dolichos lablab). Annual vines are great if you’re afraid to commit to a perennial vine just yet!

Add At Least One!

I challenge you to add at least one vine to your landscape. It doesn’t have to be against your house. You can even make or buy a structure for vines in the middle of a landscape bed. You can even plant a vine on a dead tree you are unmotivated to cut down. They can even work in pots. I’m sure you can find a good spot somewhere! We carry vines throughout the year and still have a great selection. You can browse through our PlantFinder (http://plants.plumlinenursery.com/12130015) or just come on in. See you soon!